Last week my colleagues Alexander Korotkov, Teodor Sigaev, Oleg Ivanov and I were in Ottawa, Canada on the PGCon 2017 conference. Also Alexander Kukushkin (Zalando) joined and spent a lot of time with us. I'm still having a jet lag (in my case second day is always the worst one) so I'm having some difficulties poetically describing how great it was, but I'll try. 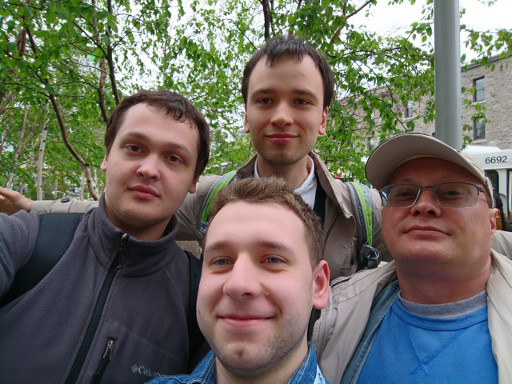 Alexander (back), Teodor (right), Oleg (front) and I (left) in Ottawa.

For me the most interesting part was to observe how the open source community works offline (the developer meeting, the unconference, etc) and to meet PostgreSQL developers in person. Somehow it makes a difference if you know that an email in pgsql-hackers@ was sent not by just someone whose name doesn't tell you a lot, but a real person you know, at least a little bit. The talks also were great. I personally most enjoyed Corruption War Stories by Christophe Pettus and So You Want To Make An Extension? by Keith Fiske. 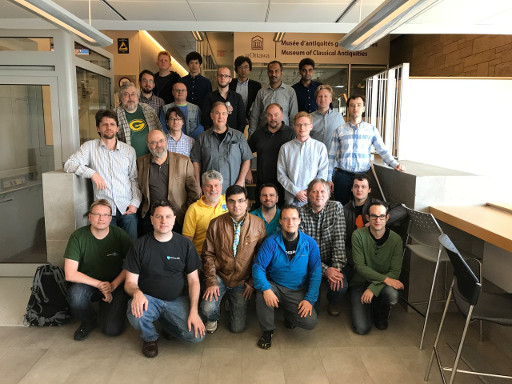 I don't know for sure whose decision it was to invite me to the developer meeting. Maybe it's just an imposter syndrome (probably not), but I'm not considering myself such a significant contributor to PostgreSQL. Anyway I would like to thank that person or persons whoever he/she is or they are. I hope I didn't disturb anyone too much ;)

At the developer meeting and later at the unconference I tried to figure out whether it's possible to make PostgreSQL upgradable between major releases without a downtime. The reason why I'm so interested in this particular topic is that Yandex guys told me that this is probably the biggest problem with PostgreSQL they have. Here you can find a detailed post by Vladimir Borodin on how they are doing an upgrade currently.

There was a consensus reached that despite the fact that it could be done in theory the corresponding amount of work will be enormous, especially for a relatively small open source community. To solve this problem every next version of PostgreSQL has to be backward compatible with the catalog schema, tuples format, pages format and replication protocol of the previous version. This backward compatibility should be maintained and tested on every combination of platform, compiler and configuration flags supported by PostgreSQL. Concentrating on solving this problem with logical replication introduced in PostgreSQL 10 seems to be much more practical.

Also, I did a lightning talk "Data recovery using pg_filedump". Here are the slides:

Unfortunately, not many PostgreSQL users know about pg_filedump utility and that it's capable of restoring data in the format suitable for using in COPY FROM queries (the feature I'm the one to blame for). TOAST is currently not supported but it should work for everything else including in-page compression. If you don't know the schema of the database you can restore it using pg_filedump as well. All this works even if PostgreSQL instance can't start and data is partially corrupted. I hope that you'll never need this knowledge, but according to Christophe's talk I mentioned above on rare occasions a tool like this can be helpful.

And have you been to PGCon this year and if so what's your impression of the conference?